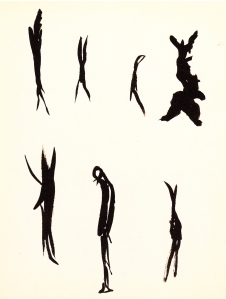 “Any old wood will do,” wrote Henri Michaux in 1949. The drum needed no skin. Just as long as your whole life could be concentrated into the impact of fingers, hand, fast, faster, less fast, slowly, very slowly. Silence was a great leech lying down within him. “In my music, there is a great deal of silence,” he wrote, but then again spoke of noises, his noise pushing away all others, then night, the self entering further into the sounds, and the pressure to record these sounds, his resistance to the needs of the mechanism, the necessity to watch its functioning and be subdued by its division of time, whereas Michaux was working into the unknown through time, “long boring passages”, or improvising on a drum to auscultate himself, to take his pulse, to make flux in his time, to be against much of civilisation, to break through a dam, “to rush down” . . .

“Since I never went in for playing with sand on the beach as a child – a disastrous deficiency from which I was to suffer all my life – when the age for it had passed, the desire to play came to me, and now to play with sounds.

Oh! what a strange thing at first, that current suddenly revealed, that liquid unexpected, that passage bearing something in itself, always, and which was.

You no longer recognise your surroundings (the hardness has left them).

You have stopped bumping into obstacles. You become the captain of a RIVER . . .

What I want (not yet what I produce) is music to question, to auscultate, to approach the problem of being.”

Ricocheting as a 1960s teenager between blues guitarist, art school dropout, Super 8 film loops and psychedelic light shows, David Toop has been developing a practice that crosses boundaries of sound, listening, music and materials since 1970. This practice encompasses improvised music performance (using hybrid assemblages of electric guitars, aerophones, bone conduction, lo-fi archival recordings, paper, sound masking, water, autonomous and vibrant objects), writing, electronic sound, field recording, exhibition curating, sound art installations and opera (Star-shaped Biscuit, performed in 2012). It includes eight acclaimed books, including Rap Attack (1984), Ocean of Sound (1995), Sinister Resonance (2010), Into the Maelstrom (2016, a Guardian music book of the year, shortlisted for the Penderyn Music Book Prize), Flutter Echo (2019) and Inflamed Invisible (2019). Briefly a member of David Cunningham’s pop project The Flying Lizards (his guitar can be heard sampled on “Water” by The Roots), he has released thirteen solo albums, from New and Rediscovered Musical Instruments on Brian Eno’s Obscure label (1975) and Sound Body on David Sylvian’s Samadhisound label (2006) to Entities Inertias Faint Beings on Lawrence English’s ROOM40 (2016). His 1978 Amazonas recordings of Yanomami shamanism and ritual - released on Sub Rosa as Lost Shadows (2016) - were called by The Wire a “tsunami of weirdness” while Entities Inertias Faint Beings was described in Pitchfork as “an album about using sound to find one’s own bearings . . . again and again, understated wisps of melody, harmony, and rhythm surface briefly and disappear just as quickly, sending out ripples that supercharge every corner of this lovely, engrossing album.” In the early 1970s he performed with sound poet Bob Cobbing, butoh dancer Mitsutaka Ishii and drummer Paul Burwell, along with key figures in improvisation, including Derek Bailey, Evan Parker, Georgie Born, Hugh Davies, John Stevens, Lol Coxhill, Frank Perry and John Zorn. In recent years he has returned to collaborative performance, working with many artists and musicians including Rie Nakajima, Akio Suzuki, Max Eastley, Tania Caroline Chen, John Butcher, Ken Ikeda, Elaine Mitchener, Henry Grimes, Sharon Gal, Camille Norment, Sidsel Endresen, Alasdair Roberts, Thurston Moore, Jennifer Allum, Miya Masaoka, Extended Organ (with Paul McCarthy and Tom Recchion), Ryuichi Sakamoto and a revived Alterations, the iconoclastic improvising quartet with Steve Beresford, Peter Cusack and Terry Day first formed in 1977. He has also made many collaborative records, including Buried Dreams and Doll Creature with Max Eastley, Breath Taking with Akio Suzuki, Skin Tones with Ken Ikeda and co-productions (with Steve Beresford) for Frank Chickens, the 49 Americans and Ivor Cutler. Major sound art exhibitions he has curated include Sonic Boom at the Hayward Gallery, London (2000) and Playing John Cage at the Arnolfini Gallery, Bristol (2005-6). In 2008, a DVD of the Belgian film – I Never Promised You a Rose Garden: A Portrait of David Toop Through His Records Collection – was released by Sub Rosa, and in 2017 his autobiography – Flutter Echo: Living Within Sound – was published by Du Books in Japan. His most recent records are Dirty Songs Play Dirty Songs, released on Audika in October 2017, Suttle Sculpture (Paul Burwell and David Toop live, 1977) released on Sub Rosa, 2018, and John Cage: Electronic Music for Piano with Tania Chen, Thurston Moore and Jon Leidecker, released on Omnivore, 2018.. He is currently Professor of Audio Culture and Improvisation at London College of Communication.
View all posts by davidtoop →
This entry was posted in into the maelstrom, Uncategorized and tagged auscultate, Henri Michaux, music, play with sound, play with sounds. Bookmark the permalink.