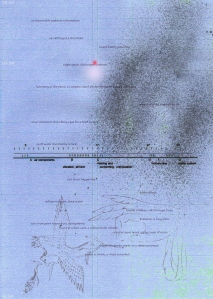 A question to be asked: why compose for improvisers? Questions are directed at time: what are the possibilities for articulating time? Improvisations splinter time. Hit a sheet of glass with a hammer and if the tap achieves the right velocity then the glass will splinter in many directions without smashing to pieces. To look at the glass is to see a maze of multidirectional lines but the evanescent surface of the glass adds a further dimension: each line may extend into depth or project into invisibility.

This is the temporal nature of many improvisations, a close engagement with the suggestibility of materials, the crazed lines of interconnectivity, the openings of air and the potentiality of bodies. A more global view is barely possible. How many improvisations last for two minutes, or stretch unexpectedly to seven hours? There are practicalities at work, of course, but also a feeling of too much expediency. An interesting current trend in London is to present many short performances in a single evening; sets may be 15 or 20 minutes long. Is this for the sake of variety, a recognition of strength in depth that echoes faintly the principle of ‘something for everybody’ typical of the Victorian Music Hall? Or is it symptomatic of a deeper current of contemporary life, the kind of syndrome churned into zeitgeist anxiety by newspaper columnists in 750 words or less, an inability to concentrate, perhaps, or the need for constant change? 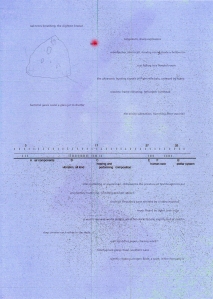 FLAT TIME/sounding began as a composition commission but its possibilities reflected an idea that has been with me since 1971. In that year I began to imagine a looping continuum of what we now call research and practice: to study the echolocating clicks of bats and to improvise with clicks, for example. In that year I was playing in a duo with Paul Burwell and ‘writing’ compositions that might be just a title, a mood, a minimal percussion figure or guitar line. Both of us were taking part in the first John Stevens workshops for improvisation, in which John isolated tendencies and stimulated listening skills with short verbal scores. “Click Piece” was one of them: play the shortest sound you can find on your instrument. Simple (or not).

Recently I listened to Angharad Davies and Rie Nakajima playing a duo at Café Oto. The event seemed more a consideration than a performance, a weighing of durations whereby autonomic percussive objects came to life as temporary sound events, their shifting placement in the room (decreasing and increasing the time taken for sound to reach a listener’s ears) bisected by Angharad’s penetrating sliver sounds or soft legato, delivered as if from hiding as she moved behind clusters of listeners or into near or distant view. You couldn’t say this was improvisation, not in the common usage of the term, but nor was it composition. Like a lot of music right now (Wandelweiser, for example), it seemed to be in search of terminology, or not in search of anything like that so much as working out the practice of how music comes together when all the old ideological divisions have gone soft.

The duo with Paul Burwell was sometimes criticised for its adherence to ‘compositions’ (slight as they were); there was a pressure to ‘just play’, to work with nothing but sounds. Now I am older I can appreciate the violence of this break with the past, but was it all so simple: just a click answered by another click and you had music? Unable to help myself I resist improvisation’s resistance (while asking myself if improvisation is a thing, or improvising individuals, or dominant groups, or a tradition, or a habit) to any kind of footnoting, any explicit reference to external ideas. In my late teens I came across a recording of duetting by tropical bou-bou shrikes. Maybe this was the most basic model for improvisation: one bird signals, the other replies. They seesaw back and forth, moving exquisitely in and out of phase as they do so. One very striking aspect of duetting behaviour is the tendency for one partner to complete the pattern if the other is absent, as if sounding the romantic tragedy of Abelard and Heloise. “When one bird died, the survivor sang the complete melody which it had never before been heard to sing alone,” wrote T. Hooker and Barbara L. Hooker in a 1969 essay on the subject. ‘Empty’ time is filled with the vocalisations of the absent desire object, just like a solitary player competing at chess with the shadow self of the self.

Another inspirational discovery came from reading Samuel Akpabot’s essay – Random Music of the Birom, published in African Arts in 1975. Akpabot compares the music of northern Nigerian one-note flute ensembles of the Birom people to the innovations of European composition after 1918: “the tone clusters and the harmony created by the individual melodic lines of Bartok, the random approach of Cage, the special effects of Dallapiccola, the polyrhythms of Stravinsky, the distorted tones of Boulez.” The important distinction for him was what he described as a freedom of expression. Of greater interest for me was the nature of this freedom – not a freedom solely confined to instrumental pitches but at a level of social engagement, through which each player articulated his relation to the group, to his instrument, to his own body and to the environmental setting of the musical event. So Akpabot’s notation of the piece includes, in parentheses, extra-musical events: “(does a little dance), (blows his nose), (urinates), (spits), (bickering between fl. 3 & 4), (laughs at fl. 3), (chats with crowd), (tunes drum).” 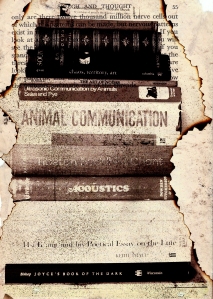 If John Latham’s theories of time and language, in particular his roller blind paintings and one-second drawings, are at the heart of FLAT TIME/sounding as a score, my own researches have shaped its form, its ‘footnotes’, its texture and at least some of the influence it exerts on its performers. That is not to say that they are condemned to confinement within my eccentricities and obsessions; simply that they make themselves open to its duration, its markers, its ritual and its intimations of other worlds that lie close to sound escaping from a mouth, expelled through a tube, ingested within the body and returned transformed, as if to the absent desire object whose place is filled by strangers.