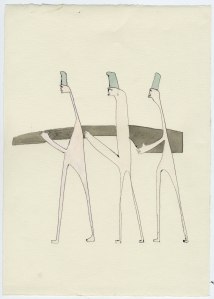 “And now he was playing, alas, the piano,” the first sentence of Robert Walser’s short prose text written in 1925, “making it sound like a deep and intimate promise, which isn’t at all the way to start a novel.” An absence of pianos throughout Daniel Blumberg’s On&On&Onetc, the title of which has the potential to be as long or longer than the famous word invented by James Joyce in Finnegans Wake to sound out the catastrophic fall of a once wallstrait oldparr, makes it easier to enter its world of cords and fibres. Songs, it could be said, were invented to exclude the sound of rooms. They formulate an enclosed world. In the same way that a line of a drawing immediately proposes a hierarchy between mark and ground, the scrape of a string announces itself as the most compelling of airs within a room. At that moment, it hovers between room and song.

I hear a room, its air and the disturbances that ricochet between its surfaces, then I hear a song, as if a ship has slowly emerged out of sea mist, its form coalescing into coherent shape for the sake of memory. Doors open and close. At a given moment of life, songs may come to seem silly, Daniel muses, but then a song comes along, a country song perhaps, to articulate that cluster of emotions indelible within loss, fatigue of the spirit, a faltering of life. The song sounds a deep and intimate promise, to be fulfilled or honoured. If we go back in history, then air, or ayre, or aria, was a term through which a certain kind of musical style or accompanied song was known. To go back to Dowland, for example, or Purcell, and hear the febrile physicality of plucked and bowed strings in close wood-lined rooms. In the absence of pianos, On&On is characterised by a similar stringy physicality, reminiscent of chicken feet, a spider’s web, loosely woven fabric or grasses moving in a breeze, fibrous ligaments, claws and sand, insect stridulation, Violin, cello, bass, guitar. Then there are drums, like rats running over an unbrushed floor, disturbing matchboxes and loose quantities of steel shot in the haste of their purpose to avoid a snare. Behind the snare drum’s head there are strings, steel now, once fibrous.

There are wet cords of voice and dry cords of string; then a harmonica, filleted air bent out of shape by thin brass tongues not unlike the tongues of geese or swans. All of these instruments share an ancestry in their parts. Robert Walser argued that horses are unduly put to work, having no voice with which to express dissent. Similarly, fragments of cat, tree, goat, calf, elephant, bamboo and other entities were once unduly put to work in the service of music, unable, as Walser put it, to negotiate. Some of this unbalanced relationship, its intensity and violence, persists in the music as an echo, a dry echo, a whistle of friction that might be a ghost in the dark. Then there are other strings, collectively played in concert, as if a window has opened and the song also rises on thermals and cloud shapes.

There is no speaking about where a song begins or ends, says Ute Kanngiesser. It’s not important. A song may move around, expand, come apart in its limbs and joints and skin to sink back into the room space, where strings are vibrating, snares rattling. A string is a line drawn taut. Ute speaks about the sessions in Wales during which this record was produced: “A strong memory is of me spending what remained of the night on the porch and watching the lunar eclipse. January 2019. It was the wolf moon and the super moon and the blood moon and it was eclipsing. I watched the moon getting darker, a sepia colour, and the moment it disappeared completely, the owls started a choir from the forest. It was incredible.”

A string is a kind of line, and just as a string may become a song so a line may become a curious figure, displaced head, limbs, face and brightly coloured clothes, all bent, scattered and tumbling in air space. Like the ghost notes of a country shuffle, they fall in and out of worlds. “If I sit at the piano or I’m on the motorbike, I hum songs,” says Daniel. Between improvisation that comes into being in a room and songs that have come into being on a motorbike, there is another music, waiting for its cue in the forest. A song may come and go, on and on and on and on.

Ricocheting as a 1960s teenager between blues guitarist, art school dropout, Super 8 film loops and psychedelic light shows, David Toop has been developing a practice that crosses boundaries of sound, listening, music and materials since 1970. This practice encompasses improvised music performance (using hybrid assemblages of electric guitars, aerophones, bone conduction, lo-fi archival recordings, paper, sound masking, water, autonomous and vibrant objects), writing, electronic sound, field recording, exhibition curating, sound art installations and opera (Star-shaped Biscuit, performed in 2012). It includes eight acclaimed books, including Rap Attack (1984), Ocean of Sound (1995), Sinister Resonance (2010), Into the Maelstrom (2016, a Guardian music book of the year, shortlisted for the Penderyn Music Book Prize), Flutter Echo (2019) and Inflamed Invisible (2019). Briefly a member of David Cunningham’s pop project The Flying Lizards (his guitar can be heard sampled on “Water” by The Roots), he has released thirteen solo albums, from New and Rediscovered Musical Instruments on Brian Eno’s Obscure label (1975) and Sound Body on David Sylvian’s Samadhisound label (2006) to Entities Inertias Faint Beings on Lawrence English’s ROOM40 (2016). His 1978 Amazonas recordings of Yanomami shamanism and ritual - released on Sub Rosa as Lost Shadows (2016) - were called by The Wire a “tsunami of weirdness” while Entities Inertias Faint Beings was described in Pitchfork as “an album about using sound to find one’s own bearings . . . again and again, understated wisps of melody, harmony, and rhythm surface briefly and disappear just as quickly, sending out ripples that supercharge every corner of this lovely, engrossing album.” In the early 1970s he performed with sound poet Bob Cobbing, butoh dancer Mitsutaka Ishii and drummer Paul Burwell, along with key figures in improvisation, including Derek Bailey, Evan Parker, Georgie Born, Hugh Davies, John Stevens, Lol Coxhill, Frank Perry and John Zorn. In recent years he has returned to collaborative performance, working with many artists and musicians including Rie Nakajima, Akio Suzuki, Max Eastley, Tania Caroline Chen, John Butcher, Ken Ikeda, Elaine Mitchener, Henry Grimes, Sharon Gal, Camille Norment, Sidsel Endresen, Alasdair Roberts, Thurston Moore, Jennifer Allum, Miya Masaoka, Extended Organ (with Paul McCarthy and Tom Recchion), Ryuichi Sakamoto and a revived Alterations, the iconoclastic improvising quartet with Steve Beresford, Peter Cusack and Terry Day first formed in 1977. He has also made many collaborative records, including Buried Dreams and Doll Creature with Max Eastley, Breath Taking with Akio Suzuki, Skin Tones with Ken Ikeda and co-productions (with Steve Beresford) for Frank Chickens, the 49 Americans and Ivor Cutler. Major sound art exhibitions he has curated include Sonic Boom at the Hayward Gallery, London (2000) and Playing John Cage at the Arnolfini Gallery, Bristol (2005-6). In 2008, a DVD of the Belgian film – I Never Promised You a Rose Garden: A Portrait of David Toop Through His Records Collection – was released by Sub Rosa, and in 2017 his autobiography – Flutter Echo: Living Within Sound – was published by Du Books in Japan. His most recent records are Dirty Songs Play Dirty Songs, released on Audika in October 2017, Suttle Sculpture (Paul Burwell and David Toop live, 1977) released on Sub Rosa, 2018, and John Cage: Electronic Music for Piano with Tania Chen, Thurston Moore and Jon Leidecker, released on Omnivore, 2018.. He is currently Professor of Audio Culture and Improvisation at London College of Communication.
View all posts by davidtoop →
This entry was posted in instrumentality, Uncategorized and tagged Daniel Blumber, Robert Walser, Ute Kanngiesser. Bookmark the permalink.