Wood striking wood, quick, hard, BOK! Impact sound sprays out, an omni-directional striking of all reflective surfaces and returning through time to the distributed centres of listening, the BOK-space of audition. This is the basis of Stuart Marshall’s composition known as Idiophonics or Heterophonics, a piece performed only occasionally in the 1970s and now about to be revived.

I was present at a 1976 performance that began in 2B, Butlers Wharf, then spread out along the Thames and over Tower Bridge. Memories of the event are foggy (that may also have been true for the winter weather) but I wrote a contemporaneous account in Readings magazine (edited by Annabel Nicolson and Paul Burwell, 1977). In that essay I described Stuart’s work with sound as being “fairly unique in this country”. Of course he could be unique or not unique, not “fairly unique”; what I was trying to convey was an emergence of sound work, an engagement parallel to contemporary art practices such as structural film and video with their intellectual preoccupations (notably Lacan) that rejected the rituals of music. As an approach it was rare though not unknown.

The piece began with three people – Stuart Marshall, Jane Harrison and Nicolas Collins – striking closely-pitched woodblocks, moving away from each other every time their strikes coincided. In a second phase they took up aerosol klaxons (“used in America for scaring off intruders and bears”, as I wrote in the Readings essay) and moved out into the freezing night: “One of the players stayed close to the building, one moved along the river to the right and the third walked out over Tower Bridge. The sounds bounced back and forth in a most spectacular way for quite some time – after a little while most of the audience left the rather precarious platforms which jut from the doors and huddled around an electric fire. Conversations started up and the piece took on the dimensions of a social gathering punctuated by alternately mournful and strident honking from outside.”

David Cunningham was present – his photograph of a murky Tower Bridge was used to illustrate my writing. Nearly 40 years later he recalls as little as me. “I remember talking to Gavin Bryars,” he tells me in an email, “as the ship approached Tower Bridge which remained closed until the last possible minute. There was a possibility that the klaxons were confusing whatever signalling system the bridge uses and some speculation about another maritime disaster for Gavin to turn into a score. I have a feeling the ship sounded a klaxon too.”

Within these accounts there are indications of a new way to be within the experience of a sound work. Nothing of the event could be conveyed through secondary media – you had to be there – but to behave as a conventional ‘audience’ was clearly silly. At the time, Nic Collins recounted the unfolding of a Connecticut concert hall performance, the klaxons growing fainter in the distance until inaudible, the audience sitting patiently in silence and then applauding when the players returned.

There are things that could be said here about the development of sound art, about the influence of Alvin Lucier, about echolocation, about bats and blindness, ships and sirens, temples and time, and those 18th century travellers in the Lake District who used cannon fire to enjoy the romantic sublime of echoes bouncing around the lakes. I think always of Giovanni di Paulo’s 15th century tempera panel, Saint John retiring to the Desert, Saint John emerging from a city gate, a small bag of possessions slung from a stick; in the centre of the painting he can be seen again at the mouth of a mountain pass, an echo of himself dwarfing the tiny buildings depicted on the plain below. This technique is known as ‘continuous narrative’. “The artist’s intention in showing the same figure more than once was clearly to indicate the passing of time,” wrote Alexander Sturgis in Telling Time. 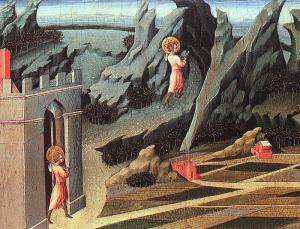 Each medium is limited by comparison with the body’s versatility. For Aby Warburg, the inherent interest in Italian Early Renaissance painting lay in its attempts to represent movement, an evocation of Antiquity in which the body was caught up, as Philippe-Alain Michaud described it (in Aby Warburg and the Image in Motion), “. . . in the play of overwhelming forces, limbs twisting in struggle or in the grip of pain, hair flowing, and garments blown back through exertion or the wind . . . He replaced the model of sculpture with that of dance, accentuating the dramatic, temporal aspects of the works.”

Music has fewer problems with time but its innate desire is to rigorously control space, to bring sounds together in coherence and spatial focus, as a kind of illusory object. Idiophonics, by contrast, pulls the elements apart to distribute them in space, leaving the more inert variety of audience stranded in time with only an empty object to contemplate. David Cunningham has recently noted my confusion of idio- with ideo- in the 1977 text. As he points out, the prefix idio- denotes uniqueness, privacy, a personal quality, as in idiosyncratic or idiomatic, but it also describes that which is distinct, unique or separate. Perhaps this latter meaning is what Stuart had in mind, a separating out of sounds, or like me, could he have been mixing up idio- with ideo-?

Stuart is not here to be asked – he died of an Aids-related illness in 1993. A strange thing: we were born within two days of each other in 1949 and found ourselves assigned to the same work table, same teaching group, at Hornsey College of Art in 1967, our first year of art school. Within that year we were the only students with a developed interest in experimental music so the coincidence, from this perspective of passed time, seems marked. Our conversations about La Monte Young, AMM and Ornette Coleman helped to make the prospect of this new venture, what we now call sound art or audio culture, more tangible than it might have been had we been alone in our enthusiasms. Stuart went on to study with Alvin Lucier at Wesleyan University, became a pioneer of video art, then an HIV/Aids activist and filmmaker until his death at the age of 44.

Read the online biographies or obituaries and they emphasise the latter stages of his career. This seems as it should be yet because of my personal contact with him and my predilections I consider him to be one of the unsung pioneers of sound art in the UK. In Musics 9 (1976) I reviewed a video screening of Stuart’s work at the London Filmmakers Coop; even from my brief descriptions it is apparent that video offered the technical means for him to explore interdependence of hearing and seeing: a bottle smashing in silence, the interior of a mouth and its ambient roar. In 1979, during the Music/Context Festival of Environmental Music at the London Musicians Collective, Stuart performed a solo version of Idiophonics from within a canoe paddled by Paul Burwell. I photographed the event as they glided off over the water, Stuart with an aerosol klaxon in hand. That photograph is not available to me at the moment but the memory is fresh enough, sound blasts ricocheting off the high walls lining Camden Canal. By that time, music was out of its box, sound thinking no longer “fairly unique”.