the sweat of toads 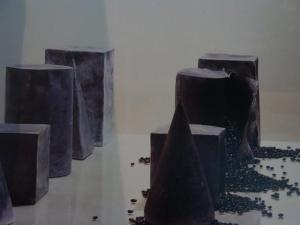 “I was in search of something – a small detail which I remembered with special intensity as part of my vision.”

The man whispers in Spanish as he pisses, sniffs, sighs, washes his hands, all sounds of the higher frequency. He is breathing in reverberance. He goes. Upstairs in Malba, the Buenos Aires Museum of Latin American Art, Victor Grippo’s Vida-Muerte-Resurrection, ten lead vessels – cylinders, square and rectangular boxes, cones – face each others as if the beginnings of a western frontier town set in the future. Beans moistened with drops of water spill out from this sombre architecture, their germination wreaking havoc among grey sobriety.

The alchemy and hermetic symbolism of materials is central to Grippo’s work, a radio drawing electrical energy from a potato, his writing – An Observation ‘In Vitro’: “It lived in the intestine of a toad. It was carefully extracted with a pipette and placed more carefully still on a glass slide, isolated, solitary and mobile in a drop of water. The refringent cilia . . .” and so on. “For Grippo,” wrote Guy Brett, “it is an article of faith that instruments of work and works of art have a common starting point . . . the irony of an inchoate lump of unstable matter forming a ‘homage to constructors’ could be read as an acid comment on the perversion of construction and order by fascist regimes.”

Writing on Lotto’s Toilet of Venus in Pissing Figures 1280-2014, Jean-Claude Lebensztejn surmised that “Lotto seems to have been keenly interested in alchemy, where urine plays an important role, and in the illustration of hermetic symbols, of which the wooden covers in the basilica’s choir provide so many stupefying examples.” C. G. Jung’s understanding was that base materials such as urine were instruments of a kind of folly. In Alchemical Studies he favoured examples of commentators ridiculing the “frivolous triflers”, the literalists who worked with urine, salts, metals, the sweat of toads. His sympathies lay with those who passed beyond the torturing of arcane materials into a contemplative symbolism of the psyche, in which lead, for example, was “identical with the subjective state of depression.” 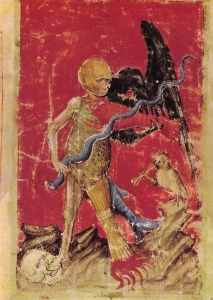 This dismissal of materials, to rid the world of objects in favour of pure spirit, is a denial. I watch keenly for the way in which materials and objects are tortured in the pursuit of that illusion of pure spirit we call music. Tania Chen at Café Oto on the 15th June drinks coffee to keep jetlag at bay, creates feedback with small walkie-talkies, plays back voicemail messages both private and banal, shows brief video clips from her travels: rooms, corridors, aircraft interiors in which flight attendants wrestle with food trolleys. The corridors have a disquieting aspect, if only because there is a weight of cinematic evidence proving that corridors are dangerous places.

She speaks about her dog Lychee, allowed in the cabin of the plane because Lychee offers emotional support in a world that has the potential to be grey as lead. The set up is like a living room, a table and chair, an open laptop, an awkward passage back and forth between table and piano. Tania moves to the piano, leans into it, her body sinister in the way it hovers over the keyboard, seducing it into softness before suddenly shooting out quick, stabbing motions of immense force, shocks that unlock the violence latent within every piano. Without drama she speaks, phrases plucked out of life’s banalities, poignant emails about family, friends and forgotten birthdays, the sacrifices of certain choices and what must be forsaken to make something this fragmented, raw, intense and compelling. Lychee the companion dog has sad eyes, we might say, knowing nothing of a dog’s sadness. “Soft and fluffy,” she says, repeating, “soft and fluffy.” But the mood is as sticky as the sharp rasp of Sellotape pulled from a roll as if ripping the dressing off an open wound. There is nothing slick here. We see all the video clips laid out as a thumbnail world of atomized moments and locations, observe the uncertain process of searching, choosing which one, see the dislocation of time, the disconnections from earthing and familiarity, the fracturing of emotional ties, represented by these disparate materials as they acknowledge travel itself as a material (just another complex of refringent cilia that form the so-called ‘instrument’, it could be said) with which a musician works, torturing the materials while lifting a veil on life-death-resurrection.